The battle between science and art in software engineering is constantly appearing. On one end, softwares are based on scientific mathematical concepts. On the other end, it lies in opinions and personal preferences. However, regardless of your situation, you must decide and move on. This article will describe many solutions to handle maps with GraphQL. We will expose the pros and cons of each of them. Finally, we will identify a satisfactory solution for most cases, which I strongly recommend following.

The topic of map is controversal in GraphQL because the GraphQL standard does not support the idea of a key-value structure. In some language it is called a Map, in some other it is called a Dictionary.

Before getting into a concrete solution, let's define a structure of the types that will help us determine what a request and a response would look like for each solution. 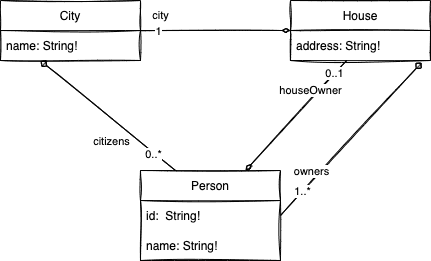 The model is simple -- three entities. There is a top entity that is a City. It has a primitive scalar type name and requires a map with a key that will be the owner's unique identifier (PersonId) to a House. It is also possible to get the complete list of people living in the city.

The house references the City and a list of owners.

Finally, the Person entity has few properties but can also have a House optionally.

Solution #1: Store the Map into a Single String

A solution is to store the whole map in a single string. The concept is to mark the map as a string and serialize the entire map into a string.

From the GraphQL server-side point of view, it is simple: you serialize the whole map. For example, if you are using Java:

If you are building the GraphQL server is TypeScript, you take the whole map and call JSON.stringify() if you are using a JS Object or use something more complex if you are using the ES6 Map. In all cases, it is pretty straightforward.

Also, from the server-side perspective, it is convenient because it does not require creating any additional GraphQL type. It's a one-solution shop where any map is transformed into a single type: a string.

From the GraphQL client-side, it gets tricky.

First of all, you need to know that the string is a structure that must be deserialized. Suddenly, the concept breaks one of the strengths of GraphQL. There is always the possibility to create a custom scalar to differentiate a JSON structure from a String. The problem is that their JSON can still be from any shape, and without performing the query and observing, it is impossible to know from the client-side. Also, if the structure changes depending on external factors, nasty surprises can occur on the consumption side.

Furthermore, the client-side must deserialize the content of the string properly. Beyond executing the deserialization, it implies handling the JSON scalar with a custom CodeGen policy and using a typePolicies for Apollo InMemoryCache if you want a clean solution does not make the client-side have custom management of the JSON type at each server calls. In this previous article, you can read more about CodeGen and Apollo Custom Scalar. The one-liner is: that it is not simple for the consumer, and the solution varies depending on the consumer technologies to query the GraphQL server.

Second, there is a typing issue. The generated type of City will have a property personToHouse of String. It is impossible to specify which property you want to consume.

As you can see, writing the query failed at design time. You cannot specify the field you want to use: the value is a string. Hence, you are forced to return the whole object. Replacing the entire object is subjective to whom is writing the server-side that returns the object. For some engineers, it means returning only the primitive types. For others, only the primary key for the children is to avoid expanding the tree of objects too deep. 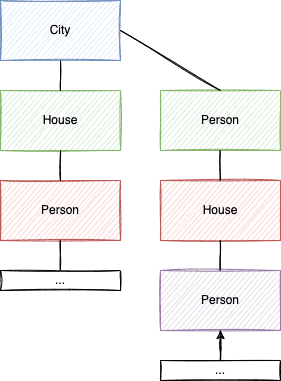 In this image, the server-side engineer can cut in many places the tree. A decision must be made since the client-side cannot provide hints about how much is needed.

As you can see, there are many ways not to return the whole graph, which in many cases is not practical. The consequence is an inconsistency for the consumers. Depending on the map, the returned payload will have a different granularity of information. Removing the power to pick which field desire in the response payload is against GraphQL mentality. It is also prone to error and forces the consumer to perform additional queries to get the assemble of information needed -- it brings us back to the REST API style of consumer patterns.

Third, Suppose you are using CodeGen to generate your TypeScript from your GraphQL to have all your type generated for you. In that case, you will be out of luck. Of course, you can coarse the return value of the JSON.parse to the generated type of Person but that is wrong. The actual type of the map should be what the user picked. In GraphQL, it could be an explicit fragment or a subset of fields but rarely the complete list of properties.

Because of limitation #2, The query assumes the client request all the person's properties. The reality is that the server might not return the entire Person but a shallow version of the Person. For example, Person has a reference to House. Because the consumer cannot specify the structure desired, the server must decide where to cut the graph. Otherwise, it can be very deep. In that example, the relationship can be infinite with a Person→House→Person→House→...

With the data in a string, it opens an issue if the schema evolves. If a field is removed on the server-side, the generated code will not indicate to the client that the type has changed until the code is executed. It opens the door to bugs at run time.

In the above code, everything works well until owners is removed from the response but kept in the House type. That is a limited issue if the House is a type generated from an automatic process. However, because the server needs to make the decision about where to cut the relationship, it opens the door to the runtime issue. As we recall, the House type is not the type of the query since there is no way to define which field to receive from a String. A GraphQL response type is defined by the user's request. The problem increases if the content of the value is not well defined by the server-side. On some occasions, the server-side might want to rely on a map because they have a loose schema, a value that can be anything, and using a string as a value is a way to circumspect the problem by pushing the responsibility to make sense of the data to the consumer. To some extent, mostly theoretically, a runtime exception can occur if the serialization/deserialization differs from the server-side and client-side.

The second solution is to create a wrapper type with a key and a value. The key can be of String or Int and the value of the kind you want to map.

You see the main inconvenience in the code above: we need to create a MapPersonHouse. If you expect to have 100 maps to different key-value within your application, you will need to have 100 additional types. The concept is to transform the map from the server-side into a list of strongly typed key-value. The benefices are many. First of all, it is well defined: we know which fields are available.

Secondly, the user can query the exact field desired. For example, the following snippet of code shows that in that case, we only want the address of the House.

The third benefit is that we can continue to leverage GraphQL subtype selection and that the server-side does not have to decide how deep to send to the client.

In that query, we fetch for the city of SanJose a map of people that gives the address of each house and the list of owners and go deeper and deeper until the client decides to stop diving.

The fourth benefit is that CodeGen can generate a proper type to consume.

From the list, it is possible to build back a map. The idea is to loop the list and take the key of each MapPersonHouse as the map's key and the value to be set as the value. The last line of the code above defines a variable houseId123 that is typed from a dynamic type of the subset of fields selected.

Limitations are now divided more equally between the server and client.

The principal argument against the solution is it requires adding an additional type for each map. GraphQL does not have a generic type, and to have a value strongly typed, we must define a new type. The limitation weight is balanced by keeping the schema discoverable, generating type possible, and the client can determine the desired field using all the common GraphQL capabilities.

A minor inconvenience is constructing the map from the list on the client-side.

Another solution is to use a map for only primitive types. It entails defining a KeyValues type. The type has one property per different values. For example, if you expect a map from key to boolean, you will need a BooleanKeyValue. If you desire a map to a type, you need to add another property.

Unfortunatelly, this solution breaks many scenarios. First of all, it only works with primitive types. In fact, it is impossible to get our example using this structure without polluting the KeyValues and then getting into the rabbit hole of adjusting the schema in such a way that it is questionable. For example, we would need alter the KeyValue with an optional houseKeyValues

You can see two issues right here: You need to create an additional type, hence not better than the previous solution. Second, the KeyValues will grow quite a lot. If you have 100 maps in your system, this type will be hard to understand for the server and client. The problem is that the client will need to guess which property of KeyValues to use. Having to guess defeats the purpose of GraphQL, which is a protocol that steward the client toward writing a proper request.

The problem is the client could have written:

It would have been valid but not practical as it does not exist and would return null. Overall, trying to push a single KeyValues brings more complexity for little gain.

After building GraphQL on the server-side and consuming it with GraphQL, I strongly recommend using solution #2: Strongly Typed Type per Map. My main argument can be summarized to:

Indeed, there are exceptions. For example, suppose you have a case of a field that needs to be loosely coupled, something that can key-value of anything. In that case, I believe that you should have the same principle: a type that wraps key-value that is String and String, allowing to store "anything" in the value. But that should be very exceptional. In most cases, even in a system with hundreds of types, embracing a strongly typed schema that converts the server-side map into a list is the most convenient and closest solution to GraphQL.