Leaving Canada to go Working in Washington for Microsoft

Since August 1st, 2014 my wife and I have moved to Redmond in the state of Washington (USA). We both lived since we were born near of Montreal, Canada. I got the opportunity to join the Cloud Division at Microsoft to work on MSDN, TechNet and Visual Studio, so we decided to do a the big jump. This journey was special since we come from the French part of Canada and we had to do a brain-switch into a total immersive English world. It was also a big change since we were getting married later in the year -- we had to change our plan and to re-plan the wedding 4 months in advance. Furthermore, we have an house that we did just build so we did not wanted to sell it : we had to find someone reliable to rent it. After having selling our cars, found someone for the house, cancelled all ours subscriptions like for the cable, Internet, cellphone etc. We were ready to move from Canada to United States. For those who are wondering why we keep the house, it is because we plan, someday to come back. Why we had to rent it is because the government of Canada require you to not have any possible residence that you can live if you do not want to be considered a Canadian resident. Which we do not want, we want to be considered an American resident for tax purpose. In the same line of idea, I have a revenue building with 6 renters. This is fine because I have a firm that will handle the building during my absence. Before leaving I also add to reimburse all my Home Buyer Plan (HBP) or "Rap" in French. This is another condition to be a non-resident of Canada. All these information, and more, were giving to me by KPMG Canada and KPMG USA.

When arrived in Tacoma Airport, we were happy to have the temporary car from Microsoft. Even if it was just for 30 days, this helped us a lot. We were able to get from the airport to the temporary house, that we had for 45 days. An important detail is that we brought from Canada a GPS and it is essential. Not only we did not know the state, we had to move across multiple towns. From Tacoma, we went to Bellevue to get the key of our temporary apartment which were in Kirkland. I am working at Redmond the next Monday (we moved Friday). Nothing is perfect, but the car helped us a lot. 30 days is a little low because you have to find a new apartment, and figure out where everything is and in the same time you start working. The first two months are more difficult but with the help of my wife and Microsoft it went pretty smooth.

Microsoft assigned us a personal assistant to get us our driving license, our social security number, our new apartment and to open our bank account. This person was a big help since we came from a different country. This personal assistant came with us during the driving test, came with us at every appointment with the government for the social security number, etc. That help was pretty precious and removed a lot of stress.

Also, Microsoft teams are very understandable about that you have to leave the job to do all preparation papers, tests, etc. They does not ask any question so it makes you feel right.

Microsoft offered us a temporary apartment for 45 days. They suggest us to start finding an apartment as soon as we get there cause it can takes time before finding something you want. For us, we started way before coming to Washington. We had a list of 30 apartments in a spreadsheet with different criteria. For us, the location was a big concern since we do not wanted to have a car there. Even with all the researches and countless hours of simulation, we got an apartment that wasn't in our list. The problem between Internet and being on place is that with Internet you cannot see how the lighting is really, what is the real condition of the apartment, what is really available, etc. Prices are also not what is provided on Internet. The personal assistant was also able to tell us some feedback from previous renters. Before leaving we were expecting to pay around 1500$US for a 2 bedrooms. We wanted to have a 2 bedrooms because we are planning to have our first child in the first year. Well, we finished to pay 1810$. The reason is that apartment in the range of 1500$ for 2 bedrooms are not located in place that you can easily do your grocery by walk. We are living right in the downtown of Redmond, within 8 minutes from a grocery. We could also go to two others, cheaper, groceries at 20 and 25 minutes of walk -- we never go to those grocery, it is too far. We are also located near of the transit center. It takes me 1 minute walk to get plenty of bus. Three buses can get me to Microsoft in less than 18 minutes. Having an apartment in the range of Microsoft by bus under 30 minutes and having a grocery under 10 minutes walk has a price. The following picture illustrate the apartment location and some facilities. The marker #1 is the apartment, the market #2 is the grocery that we go every week. The third one is the transit center. The Redmond Town Center is flagged with a 4, this is a mall center. Finally, the fifth marker show you the second closest grocery that is too far for us to go by walk, possible but too far. 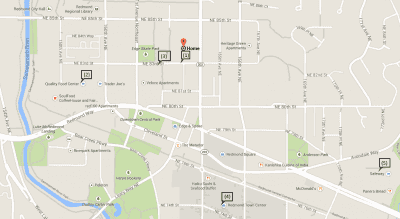 We also learn that we have to pay for the water/sewage and for the electricity. The bill depends of your consumption and the season. I would say that you can add about 250$ per months for both. So you have to pay a little bit less than 2100$ for a 2 bedrooms per month. Living in Redmond or Bellevue is about the same price. You have to get farther to have 2 bedrooms apartment more affordable but that come with a cost of time and a cost of car. For example, living in the temporary house, would cost around 1600$ but I had to walk 20 minutes and take 2 bus. A total of 1 hour 10 minute. Does not make sense for me. Also, no grocery without having to walk for 30 minutes. Not possible without car. Also, even with a car, it took me about 30 minutes in medium traffic (from Kirkland to Redmond).

With the temporary house not very convenient, we moved the week we found the apartment in Redmond. Do not forget that if I take the temporary car to get to Microsoft that my wife was stuck without transportation for the whole day. We moved within 25 days even if we had the apartment for 45 days.

Microsoft rental car is very convenient at first to get all the missing stuff you need. Even if you come with your stuff from your country, you will need foods and essential products to clean, etc. My wife got the car scratched in a parking whilst she was doing some errands and Microsoft insurance paid everything. Once moved, I kept the car for my wife and took the bus. Microsoft pay for all its employee a monthly bus card. This is awesome and save you about 100$ per month. Buses are very great in the King County (Redmond, Bellevue, Seattle area). Microsoft is located near of the Overlake Transit Center. My building is the 18, so I can walk from the Overlake Transit Center to the building in less than 2 minutes. Since we are living next to a transit center, to go to another transit center is pretty easy. I have the 545, 542 and B-Line that goes in either direction every 10 to 30 minutes. I rarely have to wait because I can just take any of them. Going to downtown Seattle take 35 minutes during the weekend. Perfect to go shopping or simply take a walk there. I prefer doing 35 minutes once in a while than every day, in the traffic living in Seattle takes more than 50 minutes of bus and this is if you live at the center of Seattle which is very expensive. So after 7 months, I can tell you that it is possible to live without a car in the area. Not always easy, but possible. Even going to the Tacoma Airport is not a big deal. You need to take the train (which is cover with the bus pass) and than take 1 bus (545). It takes about 1 hour 20 minutes. It is long but we do that travel only once per year.

The cost of living is more as you have read about the apartment. They know Microsoft employees want to live near by and they increase the price of a lot of thing. The grocery costs about 15% more than in Canada. On the other side, Microsoft pays a lot of things like the bus pass and the gym membership. Washington state does not have state tax. Winter are not hard, so electricity bills are not that high. Redmond library is free with a free access to Internet and to print. In the US, Netflix is fine so you do not need to have a cable subscription, just Internet which can be found for a good speed under 65$/month and Netflix is 9$/months. I got my cellphone and my wife's cellphone for 10$ each per month with Republic Wireless which give me unlimited phone and SMS across the US. Overall, it is not bad.

However, the situation that my wife and I are is different. We still need to pay the mortgage on our Canadian house and on the revenue building we have. My wife couldn't get a working visa, so she cannot work. That mean that I have to support for our Canadian dept, but also every bills here. To be honest, we are kind of short right now with the baby coming. However, we really like the experience so far.

Microsoft is very generous. They help with the health insurance, give free cold vaccine, give a lot of reward if you participates in events, etc.

King county is a pretty area. Lots of mountains where you can do hiking, lots of trails where you can do bike or rollerblade. The city of Redmond organizes multiple events during Christmas or have outside movies every Friday during summer. It has, during weekends, outside farm market and recurrent city events. Seattle is near (35 minutes bus), you can go there to do what every big cities offer. What is interesting is that you always feel in the nature. Lots of trees, mountains and water around. The city is well organized with a big skate park, a golf course and a huge parc called Marymoore. To give you an idea, Redmond is small but big in the same time. Small in size but attract big even like the Cirque du Soleil which is in town now. 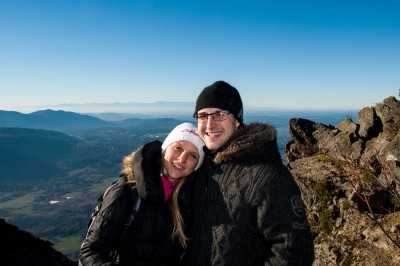 I can write for a long time about the past few months. However, even if at some point I hesitated to come, I am more than happy to be there for the few years that we will be in the US. We enjoy the American culture which is pretty diversified from everybody coming around the world to work for Microsoft. We enjoy the weather that goes rarely under 3 Celsius. I will try to take the time to write more about my working experience soon.